Posted by Vera Zimmerman at 2:52 PM No comments:

Clean Off Your Desk Day 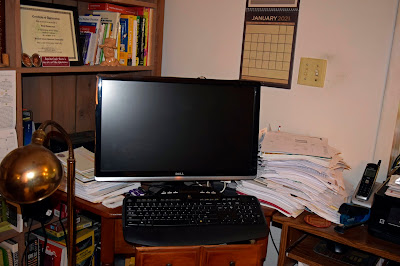 Thomas McEntee tells me that today is Clean Off Your Desk Day.

HA HA HA! It will take me longer than a day.

I realized when I posted about Honore' Leonard for Battle of New Orleans Day that I needed to do more research. I think it's time to do Thomas's Genealogy Do Over. I also need to go through a couple of boxes of print-outs to enter some of the research I've already done. Tomorrow.

Posted by Vera Zimmerman at 3:43 PM No comments: 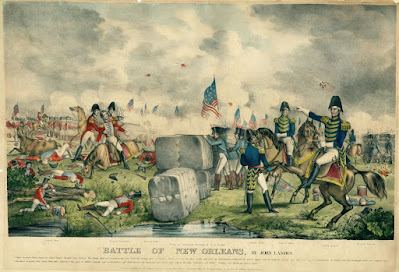 On January 8, 1815 our ancestor, Honore' Leonard, fought in the Battle of New Orleans.

Honore' was born on July 2, 1771 in New Orleans, Louisiana, son of Louis Leonard and Marie Anne Dardenne. He married Isobel Crause, also recorded as Elisabeth Kraus, on June 27, 1796. He lived to be 90 years old, dying on November 7, 1861 in Iberville Parish, Louisiana.  He and Elisabeth had nine children. Their last child, Marie Eliza Elisabeth Leonard, born October 14, 1819, is our Great Great Grandmother who married Charles Booksh December 18, 1837. Their son, Samuel Walker Booksh (1853-1930) is our great grandfather.

Posted by Vera Zimmerman at 9:46 AM No comments:

Posted by Vera Zimmerman at 10:23 AM No comments:

Just a few days after our first genealogy class for 2020 the library canceled all meetings, classes and gatherings. We will reschedule as soon as it is safe to gather again.

There are also many free classes available at the Legacy Family Tree website.

Stay safe and remember your ancestors who experienced the Flu Pandemic of 1918.
Posted by Vera Zimmerman at 1:04 PM No comments:

This week we will be looking at the 1940 and 1930 U. S. Census and taking a tour of the Genealogy Department.

A good place to start is Cyndi's List
There you'll find a list of the censuses and by clicking on the 1940 census you'll be taken to a page with specific information and links to all the relevant sites.

First on the list of links is an important site to explore, NARA, National Archives and Records Administration. Be sure to read their Resources for Genealogists.

Another part of the NARA site is Introduction to Census Records.
They also have an Official 1940 Census Website where you can learn the best way to tackle your research.

Next in importance to the NARA Site is Family Search. Start with the wiki for United States Census.
The URL for the 1940 census is 1940. You will have to sign in to use Family Search but it is free.

Cyndi's List also has a link to Steve Morse's ED Finder so once you know where your ancestors were living you can find what Enumeration District they were in. Steve Morse site

For the 1930 Census NARA's web page has a helpful page on How to Start your 1930 Census Research , but you don't have to send for microfilm anymore. There are also links to Ance$try and Fold3, also $, and Family Search which is free. Start with Family Search 1930 Census. It includes basic information and links to the images at Ancestry. You can view them for free at the Genealogy Department of the library.

We will be talking about Whole Family Research and Cluster Genealogy, also known as FAN, Friends, Associates and Neighbors. So be sure to look at the pages before and after your family on the census to see if there are any relatives or other clues.

Once you have your tree back to your grandparents it will be time to do some Library Research and you'll be amazed at the amount of material there is in our Genealogy Department.

Posted by Vera Zimmerman at 10:56 AM No comments:

On Tuesday, March 10, 2020, we will start our genealogy class, Researching Your Family History, at the Brevard Library in Cocoa, Florida. We'll be in Meeting Room 4, in the Genealogy department on the 2nd floor from 9:30 to 11:00. I'll be using this blog to post information for the students.

The first class is Getting Started and will introduce the basic forms used in genealogy research: the Family Group Sheet and the Pedigree Chart. A third form useful in genealogy is the List of Sources for Research to keep track of where we have looked and what we have found. We will also talk about looking for family records and how to cite our sources.
In the course syllabus there are many links to useful web  sites and it's my plan to put  some of them on this blog as clickable links. Here are some links for the first class:
Looking for blank forms? Start at Cyndi's List. It's also a good site to search for anything genealogical. Another good site with links is Linkpendium. Both are free.
One of the most important sites we use is Family Search. There, besides doing genealogy research, you can find blank forms . You need to register for an account on the site before you can access, but it's free. he web site address is Family Search . Another important feature of this site is the FamilySearch Wiki.  It's a wonderful learning site and it's free.
The Genealogy Department at the Cocoa library has many good How To books including Emily Croom's Unpuzzling Your Past, which we recommend. We will be taking a tour of the Genealogy Department in Class 2 and learn how to use all their great resources. Besides books on all areas of the country, they have subscriptions to some genealogy magazines. One of the best is Family Tree Magazine which every year publishes lists of the Best Genealogy Websites. They have blank forms and much more on their website at FamilyTree Magazine.

We're also going to talk about Thomas MacEntee's Genealogy Do-Over and Go-Over programs so here is a link to his 12 Steps to Better Genealogy Research: Genealogy Do-Over  .
In conclusion one of the best places for learning how to use the most popular research sites is the free Family History Guide. You can learn to use Family Search site and the pay sites like Ancestry, MyHeritage and Findmypast. They also have research pages for over 65 countries and all 50 U.S. States as well as several ethnic groups. There are links to thousands of top family history articles and videos. You could spend a month on this site!

Hope to see you Tuesday.

Posted by Vera Zimmerman at 3:00 PM No comments: